Homebrew fanatics are often looking for ways to adapt their current setup to improve the quality of their beer. Additionally, many will spend time looking to make their hobby more efficient; getting from grain to glass quicker is always a plus, as long as there’s no impact on quality.

Upgrading from bottling homebrew batches, to kegging them, is a game changing upgrade that many eventually undertake. But is it always the best option? If you’re considering the best way to package your homebrew — kegging or bottling — it’s important to look at the pros and cons of both.

Take a look below, and see what works best for you. 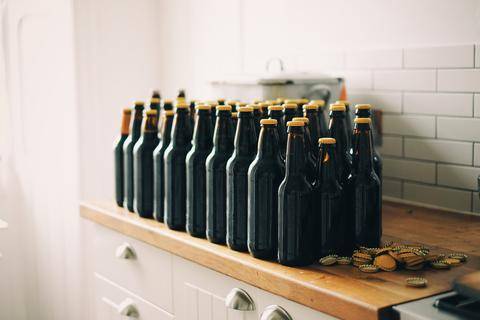 Almost every homebrewer will start out bottling their creations, and a good many of us will continue to do so for many years. Bottles offer many advantages and are perfectly suited to beer storage and dispense. However, bottling homebrew isn’t without flaws, and many homebrewers complain about how time-consuming this method is.

Bottles are somewhat iconic as method of dispense — there’s nothing quite like the hiss of a freshly opened bottle and the clink of glass on glass.

Bottling homebrew requires only the basic equipment that you’re likely to have picked up in your first brewing kit. Bottles are more or less free if you recycle, so the only real financial cost of bottling is the cost of cleaning and sanitizing products and a small amount of sugar.

Many brewers have carried out side by side comparisons of beers they’ve brewed. One sample has been kegged and force carbed, the other bottle conditioned (adding priming sugar to start a secondary fermentation within the bottle, creating co2). The bottled version is often said to have a fuller body with better head retention — both typically a result of the additional yeast in suspension. Whether the beer tastes better often depends on the style.

There’s no doubting that it’s easier to carry a 6 pack of bottles around, than a keg. Bottled homebrew can easily be given as gifts or shared out at social events.

Easier to store for long periods

A case of bottled beer can be tucked away and forgotten about for months, or even years. A keg on the other hand, would then be out of action, so unless you have a surplus of kegs, you may find you cannot brew as often while one is in use.

So far so good, but it’s not all sunshine and rainbows when it comes to bottling homebrew. The following points are the main reasons why many brewers switch to kegging.

It takes far longer to wash, sanitize, fill and cap forty 500ml bottles, than it does to do the same for one keg. A keg can be carbonated and ready to drink in as little as a day, whereas you’ll need to wait at least 2 weeks to fully carbonate a bottle of homebrew.

More risk of making a mistake

When bottling, you have less control over how carbonated your beer will be. While you can measure out the exact amount of sugar each time, a number of variables will dictate how much is converted to co2. Too much sugar in a bottle can lead to bottle bombs, whereas not enough will leave your beer flat and lifeless. When bottling, there's also an increased chance of oxidizing your beer.

Can take up space

If you're brewing on a regular basis, you will need a lot of bottles, which can begin to take up a lot of space. You will also need to find space to dry washed bottles, and store those bottles that are conditioning, plus the ones that are ready to drink will take up space in the fridge. 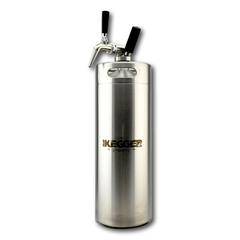 Kegging can take your enjoyment of beer to the next level. There’s nothing quite like having beer on tap in the comfort of your own home, and it’s not as difficult as it may seem.

The obvious advantage homebrew kegging has over bottling is the time it takes. But there’s more to celebrate when it comes to this method of storage and dispense.

In this madcap modern world, how many of us have the time to sit and wash, sanitize, rinse, fill and cap endless bottles? Surely it makes more sense to use one larger vessel, which takes just a fraction of the time.

Fill it, cold crash it, then carb it. Depending on your method, you can have your keg fully carbed and ready to drink in under an hour, within a few days, or after a week or so.

You can still bottle if you want

When you move to kegging, you can still bottle your homebrew. In fact, you’re more likely to get a stable, clear product that is ideal for those friends who are not used to beer with sediment. With a keg, you get the best of both worlds; you can host great parties, but still take bottles to other people!

You can referment in the keg

Bottle conditioning is said to bring more desirable flavours and characteristics to beer, but you can also keg condition your homebrew. Just add priming sugar to the keg and leave it for a couple of weeks to enjoy the same results as bottle conditioned beer.

When force carbing your beer, it’s easier to get consistent levels of co2 each and every time, resulting in a more consistent product. Additionally, if you feel your beer is too flat, it’s easy to add more co2. If it’s over carbed, it’s possible to reduce the levels of co2.

When you keg, you can ensure a closed transfer to eliminate the risk of oxygen getting into your beer. Simply purge the keg with co2, burp out any oxygen, then fill directly into your sealed keg, releasing the pressure in the tank to allow the beer to flow in.

So far kegs are looking pretty good, so why doesn’t everyone do it from the beginning? Well, there are some downsides that tend to put people off. Let’s have a look.

Compared to bottling, which is pretty much free, homebrew kegging requires a bit of an investment. The upfront cost depends on how big you go, but you will typically need to invest in at least 1 keg, a co2 canister, beer line, a tap, keg connectors and a beer fridge to fit it all in. Once set up, you’ll also have to replenish your gas every now and then. If you go down the kegging route, you will probably need to buy a separate fridge. Not everyone has the space for this, although if you think in terms of how much space 8 cases of bottles would take, it’s pretty much the same thing. As an alternative, you could look into smaller 2, 4, 5 and 10 litre kegs, which will fit inside a normal fridge or a cool box.

When beer is on tap, you’re more likely to drink it quicker, after all, it’s easy to pull the tap than it is to crack open another bottle!

The Best Choice For You?

In the great bottling vs kegging homebrew debate, there are no winners or losers. Indeed, the choice generally comes down to your circumstances. If you have the space and means to invest in a kegging setup, and are tired of washing endless bottles, go for it!

In general, the advantages of kegging outweigh the disadvantages, and ease of use and time saved make it a better choice than bottling. Some advantages of bottling can also translate to kegging, with keg conditioning an easy option for those who believe bottle conditioned tastes better than force carbed.

A Question of Style It doesn’t have to be one or the other however. Many keggers will continue to bottle some of their beer, largely based on the style of the beer. Some brews simply work best in the bottle, due to the ease of long storage, plus the qualities derived from bottle conditioning.

Typically, heavy bodied, high alcohol beers, such as barley wines and imperial stouts will do well in the bottle, hidden away for months on end as they mature. Such styles can be kegged, but you will lose a keg while waiting for them to come into their own. These specials beers can be labelled and given as gifts, with Christmas ales working especially well in bottles.

If you’re looking to ease into the world of kegging, you don’t have to go all in! At iKegger, we’ve simplified the entire process, negating the need to buy a co2 canister, keg fridge and full sized keg outright. Check out our easy mini keg packages to get started on your kegging journey.